What is the difference between an Order of Deportation, an Exclusion Order, and an Order of Removal?

How Can I Tell If I was Placed into Any Of These Proceedings?

You were officially placed into proceedings if a charging document has been filed with the Immigration Court.
Look through your paperwork that an Immigration Officer, ICE agent, or Border Patrol agent gave you. At the very bottom or the very top of the paper, you will see a form number:

Below we have reproduced images of these forms. On a rare occasion, it is possible that ICE prepared a charging document, but for whatever reason, this charging document was never filed with the Immigration Court. In this instance, the official was never “put into proceedings.”

Why Is It Important to Know If I Was Placed Into Proceedings?

There are two reasons that we like to know if you were placed into removal proceedings. First, if a charging document was ever filed with the Immigration Court (whether or not you appeared in Immigration Court), the “jurisdiction” moves from USCIS to the Immigration Court. All else being equal, if one client was in removal and another client was not in removal, and both filed their marriage-based green card cases with USCIS, the one who was not in removal would have their case approved (assuming they are eligible) and the one who was in removal would have their case denied for “lack of jurisdiction” (unless they were an arriving alien). So the first reason it is important is to know who has jurisdiction to decide your case.

The second reason it is important to know if you were in removal is to find out if you have a removal order. If you are eligible to obtain a marriage-based green card but have an old removal order, you must reopen your case before the Immigration Court to either dismiss the removal order or have your green card case hear by an Immigration Judge (usually if you have criminal conviction(s)). We have successfully reopened and terminated deportation orders from the 1970s.

How Does All of This Affect A Person?

All three (3) types of proceedings will land you before an Immigration Judge.

Deportation proceedings only apply to people who are physically present inside the U.S. and have committed an act that make them deportable from this country (e.g., criminal offense, terrorist activity, inadmissible at time of entry/adjustment, false claim to U.S. citizenship, previously deported, etc.).

If a person is determined to be deportable from the United States, the person may be deported from this country and forced to return to the last foreign departure point, deported to the home country (sometimes at government expense), or may be ordered deported and held in detention indefinitely in cases where the person’s home country will not accept the deported person (e.g., Cuba, Vietnam, etc.). The person will be given form I-221, Order to Show Cause. 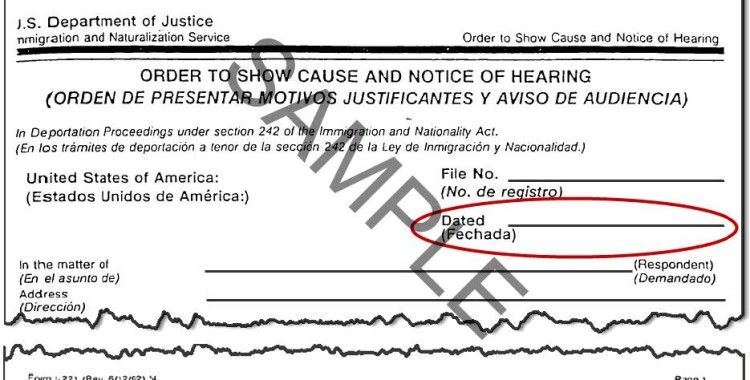 When a person arrives at a port of entry to the United States, he is subject to inspection. CBP officers question all applicants for admission (U.S. citizens, lawful permanent resident, nonimmigrant visitor, or other status), look at their paperwork, and then decide whether the person should be allowed to enter the United States. If an issue during inspection due to a criminal conviction, abandonment of status due to excessive absences from the U.S., terrorist activity, medical contamination, physical/mental defect, etc.), the person will be given Form I-122, Notice to Applicant for Admission Detained for Hearing before Immigration Judge. 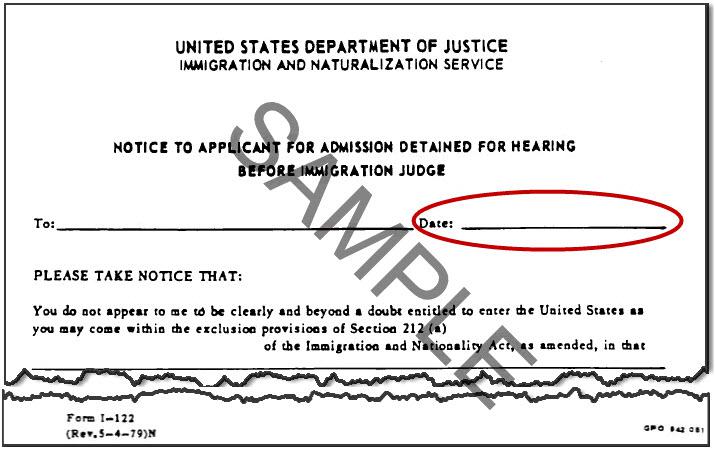 Removal proceedings take place for people who are physically present inside the United States and have been found to have committed an act that may render them deportable from this country. Deportation and Exclusion proceedings were combined into one unified proceeding known as “Removal”. If a person is found to be deportable from the United States, the person may be “removed” from the United States and forced to return to the last foreign departure point, “removed” to his home country (sometimes at government expense), or may be ordered “removed” and held in detention indefinitely in cases where the person’s home country will not accept a “removed” person (e.g., Cuba, Vietnam, etc.).

When a person is found to be physically present within the borders of the United States and is determined by an Immigration officer, inspector, or Border Patrol agent to have committed an act (e.g., criminal offense, terrorist activity, inadmissible at time of entry/adjustment, false claim to U.S. citizenship, previously deported, etc.) that is inconsistent with his claimed immigration status, then the person will receive a Form I-862, Notice to Appear.

Many times when a client receives a Notice to Appear, there is no date and time to appear before an immigration judge. This is because a hearing date will be mailed to the address provided. It is not unusual for a person to move before getting the hearing notice. If this happens and the person does not change his or her address with the Immigration Court and Homeland Security, the person will not receive the hearing notice. If the person does not appear at the hearing, the person will be “ordered removed in absentia.” 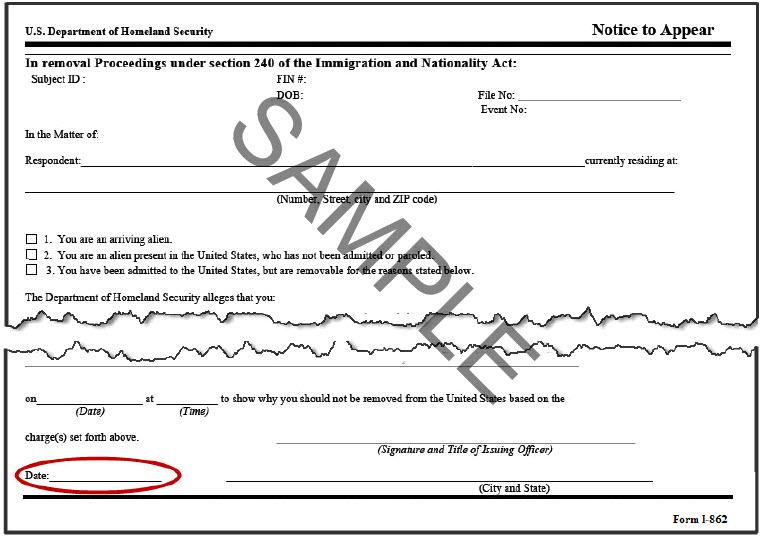 The Form I-863 is a Notice of Referral to Immigration Judge that is used in credible fear, reasonable fear, claimed status review, asylum-only and withholding only proceedings. 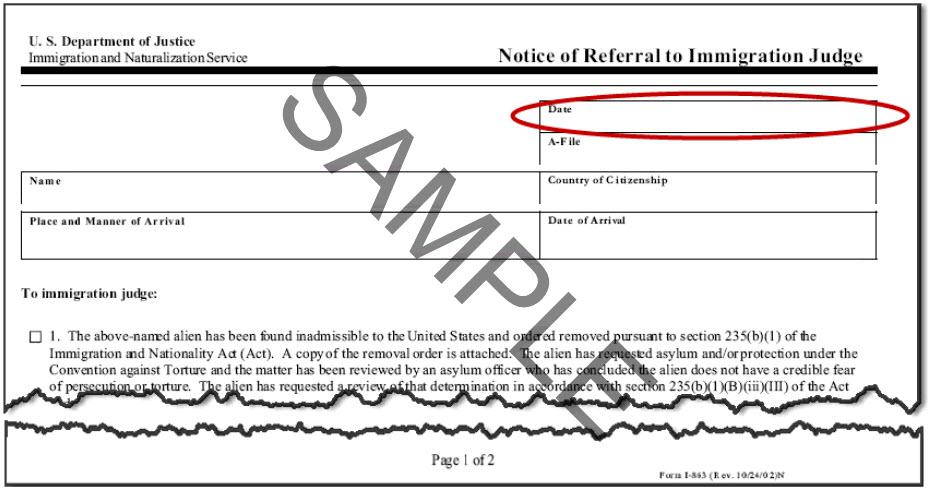 How Can You Help Me Get My Order Reopened?

Generally, a motion to reopen must be filed no later than 90 days from the date of the order. Apart from this, the best approach it to obtain the government’s consent to reopen the case. A motion to reconsider must be filed within 30 days after the mailing of the Board’s decision.

We are highly skilled in preparing prosecutorial discretion arguments to persuade the government to reopen the case months, years, or decades after an order has been issued. These filings that often exceed 100 pages contain memorandum of facts and procedural history, legal arguments, new facts, and documents that support a reopening of the case. Our newest approach will be filing a motion to reopen a removal order before the Board of Immigration Appeals.

How We Can Help:

We offer a free case evaluation by phone. We are available Monday through Friday from 8:30 am to 8:00 pm and Saturday from 8:00 am to 12:00 pm. In-person consultations are by appointment only.  Please call our office at 301.529.1912 or click here to contact us. Please be sure to provide a timeline of events along with details of your entire immigration history.

Legacy Immigration, LLC
4.8
Based on 172 reviews

Heather Kim
02:36 21 May 22
Everyone said It’s impossible for 20 years, and Dawn did it successfully within 3 years.My dad’s case was very complicated involving a deportation order. Our family went through many immigration attorneys. No one was ever confident and professional as Dawn. When I emailed Dawn for the first time, she said It’s possible and she wanted meet us at her office. Dawn took her time to listen to our story and explain every possible scenarios to us. Dawn was very honest and eager to help us. After meeting her, we felt so relieved and decided to work with her. We had to go through Motion to reopen, motion to terminate and finally i485 application. Every single step, Dawn was very knowledgeable, professional and personable. She even looked up the civil surgeon and made an appointment for my dad. When we received the request of immigration physical exam, Dawn predicted that my dad probably would get his green card without an interview. And yes, she is a psychic. My dad received his green card two weeks after his physical exam without an interview. We thank God letting us find Dawn.

Varsha Patel
02:41 18 May 22
I had a Great Experience with Dawn C. Sequeira I used her firm for first and second marriage base green card and my naturalization. She was very efficient, detailed oriented and highly professional. She is very knowledgeable, thorough, a great communicator, and truly represents best interests of her clients. If Dawn takes your case, you can be confident that she'll do everything and will win it. I am very happy with her work. I would highly recommended Dawn for any immigration casesThank You very muchVarsha Patel

Constance Critchlow
23:24 29 Apr 22
Dawn is absolutely amazing! She has done all my visas over the last few years, from F1 to H3, H3 to H1B and recently just got my H1B extension approval without premium processing and all without any RFEs!! It was such a quick process and Dawn is so thorough, knowledgeable and just a great person!! Thank you Dawn for all you have done!!

Gift Enya
15:08 16 Jan 22
She was awesome, knowledgeable and great to speak to. Perfect attorney for any case. Thanks

varsha visana
14:20 11 Dec 21
I was looking for an immigration attorney who came highly recommended by her clients as well as held accolades that showed they were one of the best in their field. After a lot of research, I came across Dawn’s firm which encompassed all of what I was looking for. I was amazed at how many great reviews and success stories she had. After contacting Dawn, and discussing my case with her, I knew immediately I wanted her to represent me. Unlike my previous attorney, she responded promptly and explained the filing process to me to keep me informed and educated. On the day of my naturalization interview, she called me to go over the process and answer any questions I had. This helped calm my nerves and I was able to go to the interview with confidence. Dawn is not only knowledgeable about complex cases, but she shows compassion towards her clients by giving them moral support and encouragement. I highly recommend Dawn to anyone who needs assistance and guidance in their immigration journey.
See All Reviews

We want to help you navigate through the complex field of Immigration Law. Contact our office today. Please call 301-529-1912 to schedule a consultation.